Not enough stock.
Your item was not added to your cart.

Comprehensive Genetic Wellness Checkup
Studies have shown that cats and dogs are at least 100 times more likely than human to develop genetic disorders. An animal may appear healthy now, however, it can develop a genetic disease later in life and pass the defective gene to future generations. Amvet Biosciences can unlock the genetic code of DNA empowering you to plan and act proactively at an early stage.
DNA Tests for Mixed breed Include

DM is a progressive neurological disorder that affects the spinal cord of dogs. The gene mutation has been found in more than 70 breeds. Dogs that have inherited defective genes will experience a breakdown of the cells responsible for sending and receiving signals from the brain, resulting in neurological symptoms. The disease often begins with an unsteady gait, and the dog may wobble when they attempt to walk. As the disease progresses, the dog's hind legs will weaken and eventually the dog will be unable to walk at all. DM moves up the body, so if the disease is allowed to progress, the dog will eventually be unable to hold his bladder and will lose normal function in its front legs. The onset of DM generally occurs later in life starting at an average age of about 8 years. The frequency of disease gene varies across different breeds. Pembroke Welsh Corgis, Cardigan Welsh Corgi, German Shepherd, Collie and Boxer are at the highest risk of being affected by DM.

HUU refers to the presence of excessive amounts of uric acid in the urine. This trait predisposes dogs to form stones in their bladders or sometimes kidneys. These stones often must be removed surgically and can be difficult to treat. Hyperuricosuria is inherited as an autosomal recessive trait. The trait can occur in any breed but is significantly more common in Dalmatian, Bulldog and Black Russian Terrier. Affected dogs are prone to develop bladder/kidney stones. The carrier frequency of HUU in affected breeds is about 14.5%.

Malignant Hyperthermia or malignant hyperpyrexia is an autosomal dominant genetic mutation. It is a life-threatening condition that is usually triggered by exposure to certain drugs used for general anaesthesia, specifically the volatile anaesthetic agents and the neuromuscular blocking agent. Pets predisposed to malignant hyperthermia are also sensitive to certain ingredients present in drugs and food such as caffeine. In susceptible animals, these drugs can induce a drastic and uncontrolled increase in muscle oxidative metabolism, which overwhelms the body's capacity to supply oxygen, remove carbon dioxide, and regulate body temperature, eventually leading to circulatory collapse and death if not treated quickly. Breed with the highest risk of MH includes Australian Shepherd, Collie and Long-haired Whippet. However, the carrier frequency of the disease gene in German Shepherd is about 10% and in mixed-breed dog is about 5%.

MDR1 results from a mutation in the multi-drug resistance gene. This gene encodes a glycoprotein that is responsible for pumping many drugs and other toxins out of the brain. Dogs with the mutant gene cannot pump certain drugs out of the brain as a normal dog would, which may result in abnormal neurologic signs. The result may be an illness requiring an extended hospital stay or even death. This test is most commonly used for Ivermectin sensitivity but many other drugs are responsible for MDR1 symptoms. MDR1 is more common in Collies and related breeds.

vWD is caused by a lack of von Willebrand factor which is a protein that plays a key role in the blood clotting process resulting in prolonged bleeding. The disorder occurs in varying degrees of severity ranging from trivial bleeding to excessive life threatening haemorrhages. Symptoms include spontaneous bleeding from the nose, gum and other mucous membranes. Excessive bleeding occurs after an injury, trauma or a surgery. Often dogs don’t show clinical signs until something starts the bleeding, such as nail trimming, teething, spaying, sterilizing, tail docking, cropping or other causes. Bleeding also occurs internally in the stomach, intestines, urinary tracts, genitals and / or into the joints. Doberman is the highest risk in vWD; frequencies of carrier and affected being 49% and 26%, respectively. About 1% and 9% of Poodles are affected by and carrier of vWD.

Cataracts are a clouding of lens of the eye caused by a breakdown of tissue in the eye. This generally results in an inability to see clearly, and can cause total blindness. Some forms of cataracts in dogs are hereditary, they are known as Hereditary Cataracts (HC). Dogs are typically affected bilaterally with onset typically occurring between 1 and 3 years of age. Cataracts usually begin small and grow progressively, though the speed of growth is highly variable. Some cataracts will grow so slowly that the dog's vision remains relatively clear, while others will grow such that the dog will quickly go blind. Corrective surgery is possible, though it is costly and is not always effective. About 23% of Australian Shepherd and 8% of Staffordshire Bull Terriers are carriers of HC.

Dogs with vitamin B12 malabsorption cannot properly absorb vitamin B12 from the small intestine and kidneys. Affected dogs have an increase in certain proteins in their urine, however, symptoms may not be readily recognized by owners. Initial signs of this disorder include a loss of appetite, lack of energy, poor weight gain and poor muscle mass. Puppies with this disorder will fail to grow normally. Anaemia can occur. Treatment includes vitamin B12 supplementation.

CD causes day blindness due to degeneration of the retinal cones. CD can be diagnosed in the early weeks of the affected dog’s life. Between 8 and 12 weeks of age, when retinal development is normally completed in dogs, signs of vision problems are noticeable. The pups become day-blind and are photophobic – meaning that exposure to bright light is irritating. Vision in dim light remains normal. The retina of the affected dog initially appears normal when examined by an ophthalmologist. However, electroretinography response from the degenerating cones declines with age and is undetectable in the mature CD-affected dog.

How to Collect DNA Sample
1. Right before sample collection, please visually check the animal’s mouth to ensure it is clean and clear of any possible contaminants (e.g. food)
2. Write the name of the pet on the sampling tube.
3. Open the swab case and remove the swab, being careful not to touch the sponge tip.
4. Place the swab between the cheek and gum of the animal being tested. Scrub the swab against the inside surface of the cheek for at least 5 seconds to collect cheek cells (not saliva).
5. Allow the swab to air dry for 5 minutes.
6. Place the swab back into the original case.
7. Fill out the information in the DNA Sample Submission Form and make sure it matches the information on the sampling tube.
8. Mail the DNA samples and submission form to us.
Order Information
1. The sample collection kit (including 1 DNA collection tube, 1 DNA submission form and 1 envelop with return address) (per animal) will be mailed to your address within 48 hours after we received your order.
2. Once you have received our sample collection kit, please follow the guidelines mentioned above to finish the sample collection as soon as possible.
3. The DNA test certificate will be sent by mail and email in 12 working days after we received complete DNA samples and submission form. 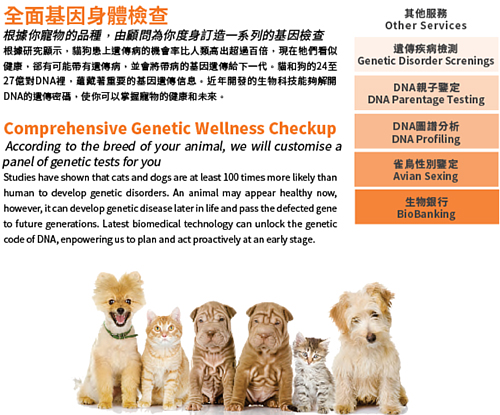